What does the Toyota “TEQ” logo mean? 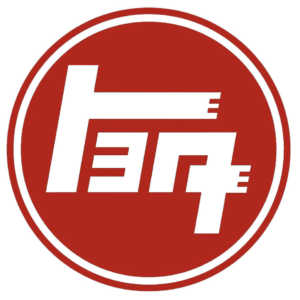 Anyone who has been around old Land Cruisers has likely encountered Toyota’s early TEQ mark. But, what do the T, E, and Q in Toyota’s early mark actually mean? You may be surprised to find that what you are looking at is not even any of those letters!

Most of this post is attributed to Richard Mulvihill, over at Japan Travel Cafe. Be sure to check out his articles on learning the Japanese language from words you already know!

What we call the TEQ is actually something in Katakana, a form of Japanese writing!

According to wikipedia, Katakana is a Japanese syllabary, one component of the Japanese writing system along with hiragana, kanji and in some cases the Latin script (known as rōmaji).

To spell “Toyota” in Katakana, you have to use 3 characters that make the combined sounds: To, Yo, and Ta. Those are actually the characters that you see in what we mistakenly translate into English as t, e, and q. 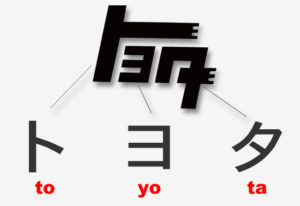 Let’s actually take it all the way back to the founder’s name – Sakichi Toyoda. Notice that his name ends in da, not ta? If you wanted to spell out Toyoda in Katakana, it should actually look like this, with the extra marks circled in red. Those make the last character have a da sound instead of a ta sound. There’s a reason why they opted for the ta, and it relates to the Japanese lucky number 8! But, we’ll talk about that later on.

The name “Toyoda” in Katakana

So, why aren’t they still called Toyoda?

The Toyoda company, or Toyoda Automatic Loomworks, actually started by making looming equipment for sewing thread into cloth. They only began making cars in the 1930s.  Their logo looked like what you see below, and for a logo created in Japan in the early 1900s, it’s quite progressive that they chose to use what look to be English characters. (They are actually part of the roman alphabet, and called Romaji for that very reason!) It’s thought that the choice to use Romaji characters was intended to showcase that they were a progressive company, open to the world. 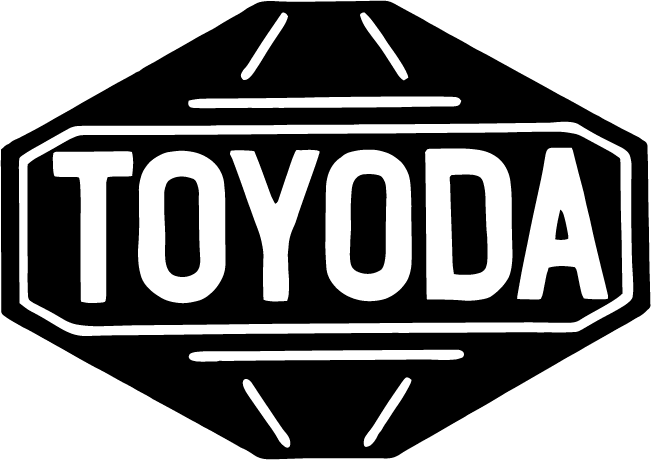 But, around 1936, three years after they began making automobiles, they decided to hold a contest for someone to design a new logo. The winning design was actually based on the Katakana for Toyoda, but then they realized something–it took ten strokes of the pen to write the characters for Toyoda (with the extra two marks above what we call the Q in the TEQ mark), and only 8 strokes for the ta ending. In Japanese culture, the number 8 is regarded as a symbol for good luck, and even the character for 8 represents the suggestion of further growth. So, Toyoda became Toyota! 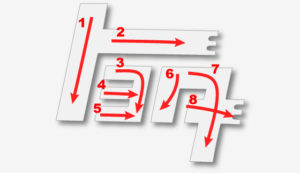