In late 2016, while on the hunt for the original (early) rear seats, I came across a full set on eBay… and they happened to be attached to a truck. The truck was a real dirtbag. But, why buy just the seats when you can buy the whole truck, right?! So, I set my sights on my rusted-out prize, and knew I had to go get Dirtbag. It all happened incredibly fast: successful eBay purchase. 2-day drive from California to Ohio with my lazy husky, Scout. Mad dash to install the tow bar bumper before a blizzard swept in. Flat towing (on 30+ year-old tires) through 1 blizzard, 3 torrential downpours, 9 states, and 2,367 miles. 5 days later, Dirtbag and I arrived relatively unscathed in Hollywood.

I’ll admit, I didn’t have much hope for it as a driver. Of course, I was told the engine should be good, and if everything got wired up, it might run, but we all know how much that’s worth – and, I had zero faith in the old rusty brakes, the crunchy seals, the corroded – you get the point. So, the first thing I did was pulled those rear seats for the other Cruiser and stuck them in storage until I could reupholster them. Winning! I had gotten what I came for. And so much more…

Then it sat – for almost a year. 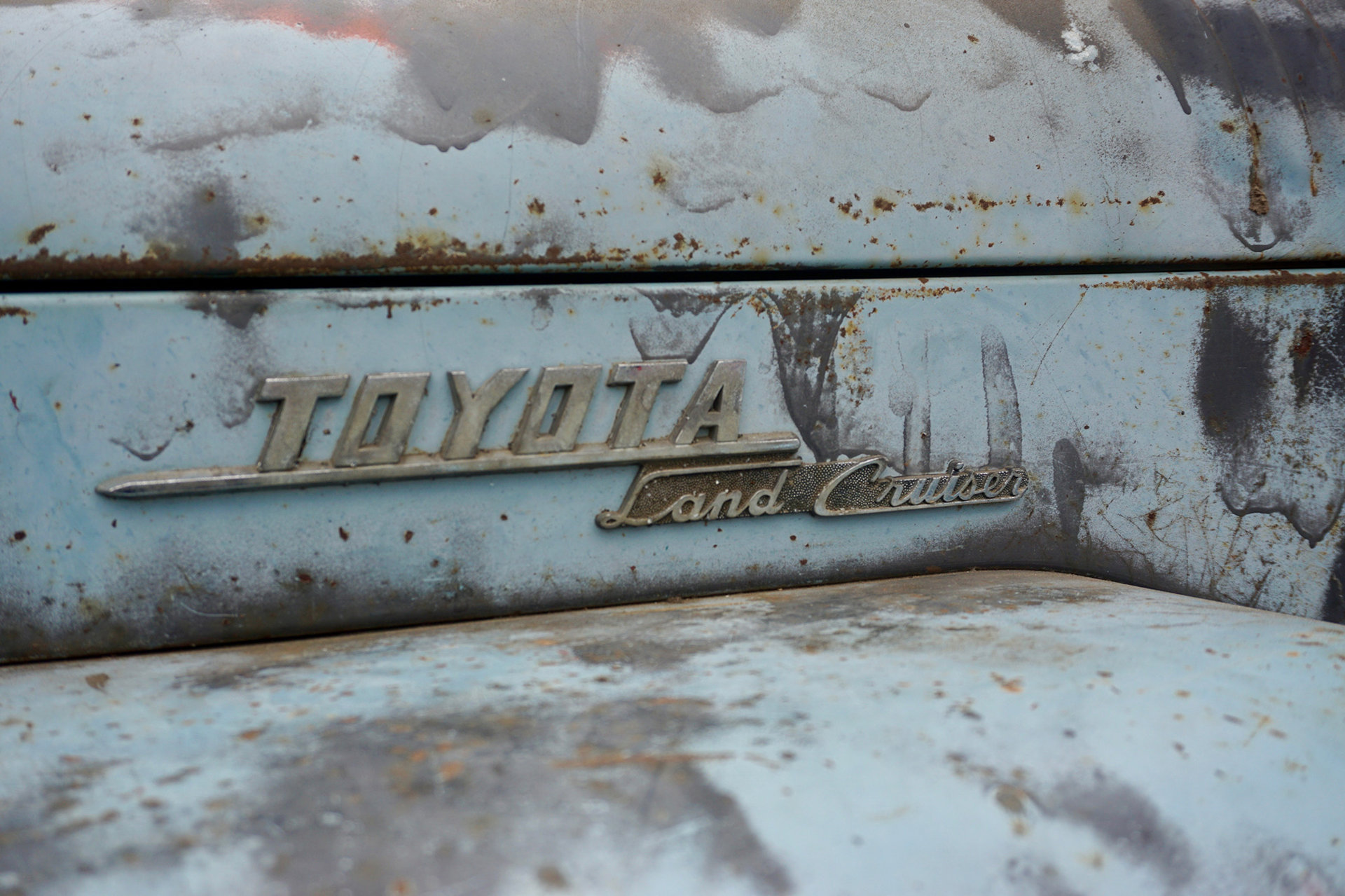 During that time, I went ahead and started the frustrating process of getting a California non-op title, managing the nonsensical inspections, multiple annoying trips to the DMV, and then, as if by magic, I got the plates— but that’s a (maddening) story for another day. As soon as I had a title and plates, the small flicker of a wild idea began to grow… What if I could get this thing up and running, instead of just parting it out? A donor vehicle, and a second driver, sort of a symbiotic relationship between the two project trucks. One ending in a 100% original restoration, and the other as a really cool patina driver with a lot of new, but non-original parts.

Then, the madness took hold. (Insert cool music-driven montage of your choosing here.)
My first goal was to make sure the motor could turn over. I was feeling optimistic, but it had been sitting for so long, it was impossible to tell, so I tried turning by hand on the crank pulley. No luck. I tried with a fat screwdriver on the hand-crank nut on the front. Nada. Oil in the pan? Lots of it, and surprisingly very clean. I removed the spark plugs and tried the Marvel Mystery Oil method: soak each cylinder with about 2 tablespoons of the stuff for a few days, and then try again. I was able to turn it about 1/16th of a turn, and then it stuck again. So, I added more MMO into the cylinders, waited a week, and then eked out another 1/8th of a turn.

I was getting somewhere, if not quickly! Next, I put a breaker bar on the flywheel teeth one by one and levered against the block. One tooth, one push, one small turn. One tooth, one push, one small turn. I did this until it had successfully rotated two full turns without any clanking or weirdness. At this point, I was feeling good, so I grabbed the battery from the other truck and hooked it to the starter.

‘Round and ’round it went, more freely with each turn. No clanks. No clunks. Just beautiful spinning of that old F motor. Once I knew the motor turned, I felt like I could conquer the world, even though the truck wasn’t, you know, running yet. A friend of mine and I worked together to replace all of the brake parts: all steel lines and soft lines, wheel cylinders, master cylinder, shoes, parking brake cable, parking brake shoes. Even if this truck wouldn’t go, at least I knew it would stop.

We re-wired, replaced, re-tested, and got every switch, light, and gauge working, except for the old burnt out ammeter.

New radiator hoses, new belts, new plugs, new clutch slave and master. I had gone down the rabbit hole, deep into the Land of Cruiser madness. I HAD to get this thing running. A notion had turned into an imperative.

One month later, there it sat with shiny new headlights and turn signals, glimmering in stark contrast to its rusty panels, and I was ready to finally conquer the steel beast of that old F motor.

And so, we finally came to the moment of truth…

Jumper cables from the other Land Cruiser, a quick timing check, and a palpable feeling of excitement.

Pump the gas. See fuel in the barrel.

Click as my buddy turned the ignition switch to the first position.

The smallest turn of the distributor. Zzzzrrrr-pufff.

We had done it. In an almost anti-climactic way, it went from dead to alive in mere seconds. Like it just woke up from a long nap and said, “Oh, hey guys. How’s it going?” A testament, I suppose, to the nature of these machines, and the engineering prowess of the Japanese. Someone should write a book called The Everlasting Land Cruiser. These machines are timeless.

We climbed in and took it for a spin around the block. One lap in, and the smoke started to dissipate from the exhaust. Two laps and we were zipping along like it was fresh off the dealership floor. People in the neighborhood stared at us… two dudes tumbling by in a rusty old clunker with no windshield… unaware that this was our chariot, and we were conquerors riding high on our moment of victory.

There are few things in life that compare. And, admittedly, people who don’t appreciate old cars probably just won’t get it. Dirtbag represented a true labor of love: a rust-laden member of street society in Los Angeles, cruising with the ubiquitous Prius, and frequent Tesla as if saying, “I may be noisy, smelly, and crude, but let’s see how you’re doing in another 53 years.” In LA, that’s an incredibly valid concern.

You can find the original story, and the complete thread, on the IH8Mud Forum.

Behind the Design: Russell Taylor features the Toyota FJ40

Behind the Design: Russell Taylor features the Toyota FJ40